Facebook whistleblower Frances Haugen is a ‘non-conformist’ who lives in one of San Francisco’s hippest neighborhoods and regularly volunteers at Nevada arts festival Burning Man.

Haugen, 37, stunned the tech giant by leaking a cache of insider documents that showed it covered up research showing it harms children and, on Tuesday, told a Senate subcommittee that it refuses to add safeguards so it can maximize profit.

During the damning testimony, she added: ‘The result has been more division, more harm, more lies, more threats and more combat. In some cases, this dangerous online talk has led to actual violence that harms and even kills people.’

Haugen, who now lives in San Francisco’s Mission District in a $3,800-a-month apartment, is no stranger to taking a stance: even as a child growing up in Iowa City, Iowa, she was known for doing things her way.

Frances Haugen, 37, was revealed on Sunday as the source behind a leaked trove of Facebook documents which detailed how it routinely misleads advertisers 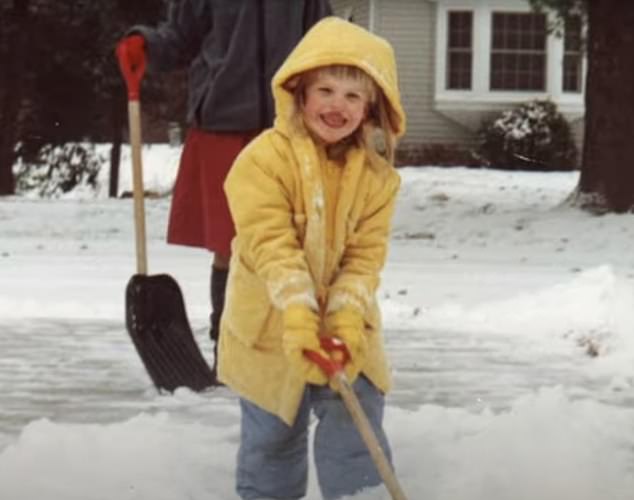 In a 2011 profile, her former Elementary School teacher Jan Bohnsack told how the future whistleblower was a ‘non-conformist’ 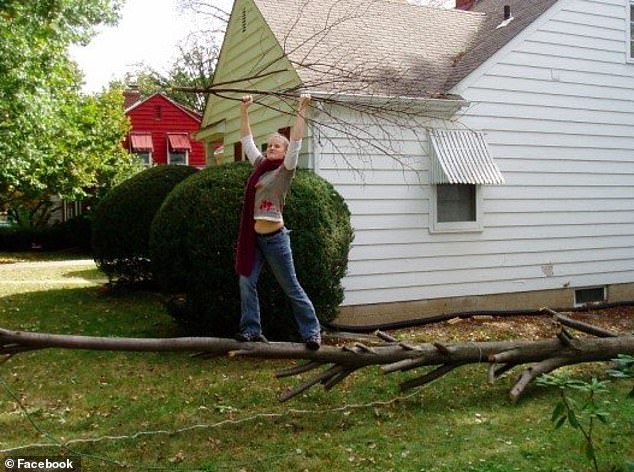 The eldest child of two scientist parents, Haugen grew up in a $450,000 home in the leafy suburb of University Heights – a wealthy area known for its open spaces and for its proximity to the University of Iowa.

Her father Thomas, now 72, is a pathologist who combines a role as an associate professor at the University of Iowa with clinical work as director of Pathology and Laboratory Services at the Veterans Administration Medical Center.

Like her daughter, her mother Alice, 69, has taken an unconventional path: giving up a 29-year career as a professor in biochemistry in 2012 to retrain as an episcopal priest.

Now the priest-in-residence at St Paul’s Episcopal Church in Durant, Iowa, she describes her role on LinkedIn as officiating at weekly Eucharist services, as well as teaching in the diocesan school.

Haugen has credited Alice for her interest in politics and social issues – something that endures today, with the 69-year-old’s social media interests ranging from vaccine hesitancy to public health via quirky tangents such as an article on how cheese shaped Western history.

She also bequeathed a love of science to both her daughter and her younger brother Peter, 32, who is now a teaching assistant in physics at the University of Utah in Logan.

Photos shared by Peter on Facebook are testament to the family’s closeness: one set taken in 2006 shows the siblings helping to chop up a fallen tree, accompanied by a caption joking that having a sister teaches you humility.

Both attended the local Horn Elementary School before going on to study at Iowa West High School where Haugen was a leading light on the debating team.

But it was at Horn that Haugen took her first steps towards the tech world: taking an intensive course on coding and advanced math. 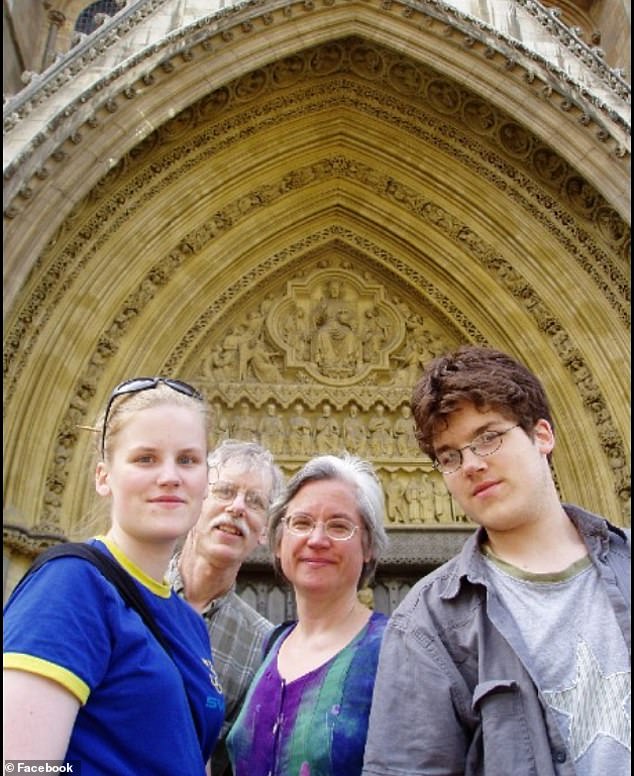 Haugen, whose net worth is estimated between $1million and $5million, said she grew up attending Iowa caucuses with her parents, which instilled ‘a strong sense of pride in democracy and responsibility for civic participation’. She’s pictured with her family 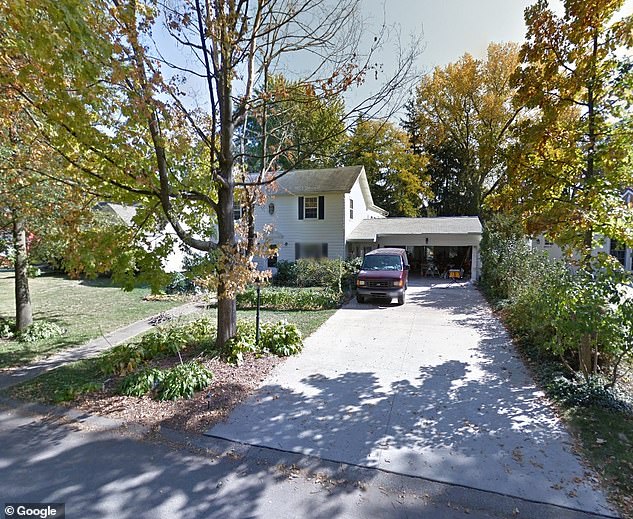 Haugen’s mother Alice, a former biochemist turned episcopal priest, still lives in this $450,000 family home in the leafy suburb of University Heights which she shares with husband Thomas, 72 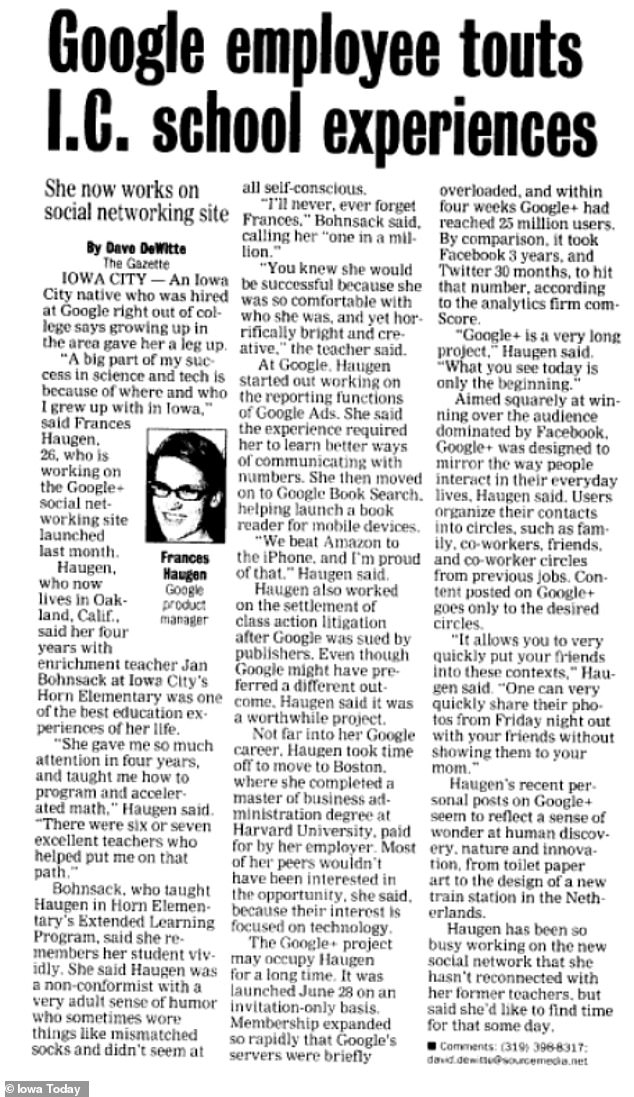 Speaking to the Cedar Rapids Gazette in 2011, Haugen spoke about her job at  Google + – a network that Haugen said in a 2011 interview unearthed by DailyMail.com was designed to lure users away from Facebook. ‘It allows you to very quickly put your friends into these contexts’

In an interview with the Cedar Rapids Gazette in 2011, former teacher Jan Bohnsack described the future whistleblower as a ‘non-conformist’ with a very adult sense of humor who liked wearing mismatched socks. 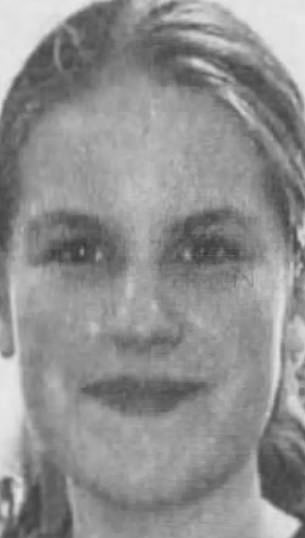 She said her former charge was ‘one in a million’, adding: ‘You knew she would be successful because she was so comfortable with who she was, and yet horrifically bright and creative.’

For her own part, Haugen credited Bohnsack with putting her on the path to tech success, saying: ‘She gave me so much attention in four years and taught me how to program and accelerated math.

‘There were six or seven excellent teachers who put me on that path.’

Haugen also showed an early interest in social issues – writing to her local congressman about a road building project and telling another local paper, the Press-Citizen, in 1997 that she hoped to be a biologist and feed the world.

She said: ‘I’m more into gardening because I want to be a biologist and grow food to feed the world.

‘Or I want to be a lawyer and then become a politician.’

By the time she arrived at Olin College to study electrical and computer engineering in 2002, her plans had changed – although her interest in social issues had not.

During her three years at Olin, she and 14 classmates founded the college’s yearbook – which still exists today – and plotted its business model and layout.

In an online resume, she wrote about the challenges of marketing it to college-age students and spoke of encouraging mass community buy-in – ideas that would prove useful when Silicon Valley came calling.

The first on the scene was Google which sponsored her through a master’s degree in general management at Harvard Business School and then put her to work on its own social network, Google +.

In a 2011 interview with the Cedar Rapids Gazette, Haugen sold the project as a cooler version of Facebook that allowed you to put contacts into siloes.

Haugen was also able to combine her love of tech with another passion – books. Despite being just out of college, in 2009, she became the founding project manager of Google Books – an ambitious attempt to create the world’s biggest online library. 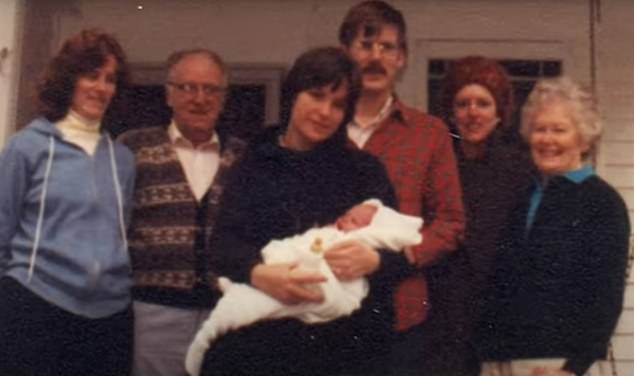 Haugen, now 37, is pictured as a baby with her family. She dreamed of becoming a biologist as a child

With geeky enthusiasm, she wrote about how book covers had almost been overlooked before she and another engineer stepped in to fix it at the last moment.

She wrote: ‘The effect the new covers had on Google Books was extensive – a wide range of books suddenly became ‘real’ overnight. 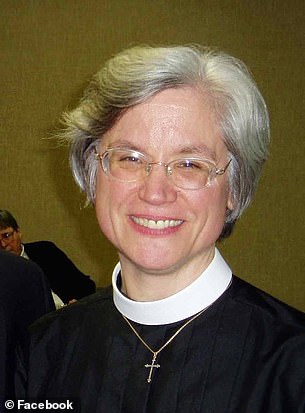 Haugen’s mother, Alice Fulton Haugen, put her biochemistry work aside in 2012 to become an Episcopalian priest. She praised her daughter for going public with her Facebook concerns

‘One fun thing to note, while all of my covers have the same aspect ratio (they’re optimized for the mobile reader), the new covers are tailored to the exact dimensions of each book.’

Next, she put her skills to work for the company’s Knowledge Graph before leaving for a role as a product manager at Yelp in 2015. A year later, she moved to Pinterest before taking up a job with Facebook’s Civic Misinformation team in 2019.

Away from work, Haugen continues to be the ‘non-conformist’ her elementary school teacher Bohnsack described.

Immersed in San Francisco’s tech scene, she is a regular at Nevada’s Burning Man Festival and has volunteered four times as a Black Rock Ranger.

According to the festival’s website, the role involves helping reunite lost children with their parents, taking the worse for wear back to their tents and listening to anyone who needs it after a bad day.

The website adds: ‘Rangers act as non-confrontational community mediators, providers of reliable information, facilitators of public safety (with the expectation that everyone reads the back of their ticket, of course!), and navigators of the edge of chaos.’

For Haugen, it’s another way to help out – something she repeated in a statement to Congress about why she had chosen to blow the whistle on Zuckerberg and co.

‘Facebook chooses to mislead and misdirect,’ she said. ‘Facebook has not earned our blind faith I felt compelled to take an active role in creating a better, less toxic Facebook.’

Haugen gave up her lucrative, six-figure Facebook salary and outed herself on primetime television Sunday as the tipster who quietly leaked thousands of pages of company documents to journalists, lawyers, and lawmakers. 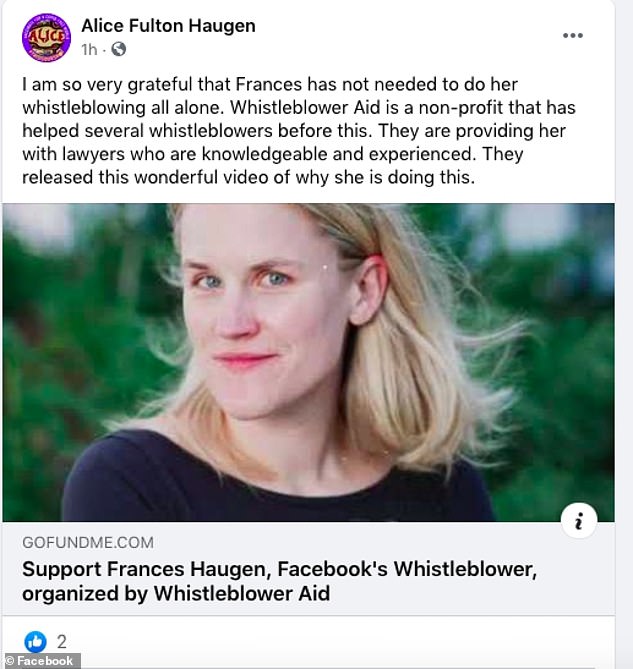 Her mother Alice, 69, has written about Haugen’s revelations in five separate posts on Facebook 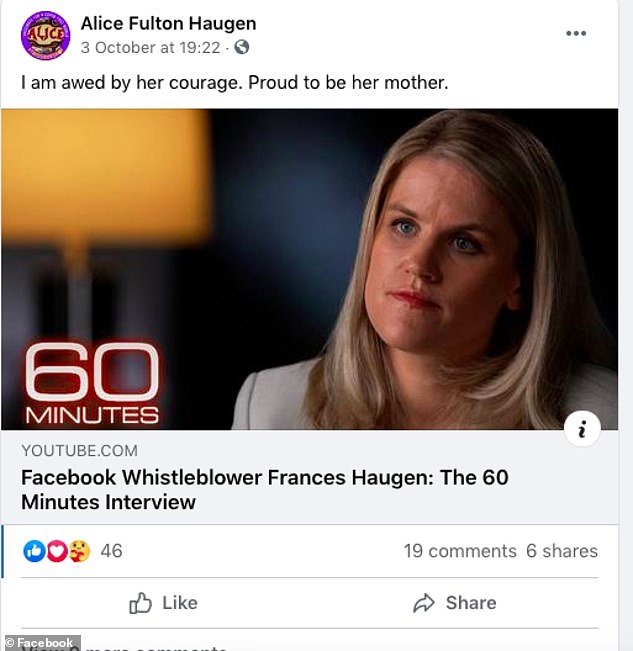 On October 3 her mother – a former biochemist turned episcopal priest – said she is ‘awed by her courage. Proud to be her mother’ 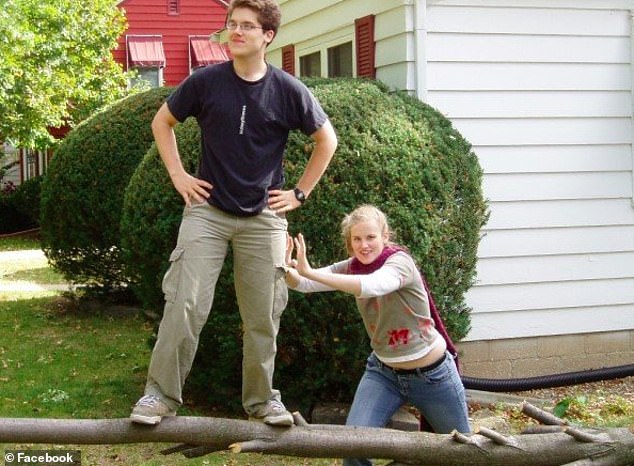 Photos shared by Haugen’s brother Peter are testament to the family’s closeness, among them shots of the siblings larking about together in 2006 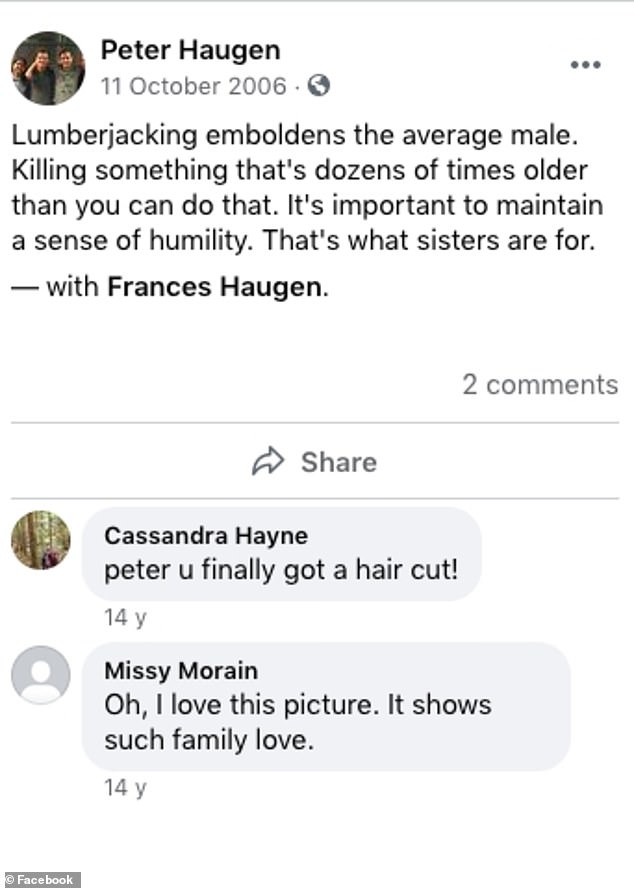 Both Haugen’s mother and younger brother Peter, 32, have been following her senate appearance closely, with Alice sharing several links to a live feed and noting Haugen ‘looks much more like herself than on CBS’.

She also shared a link to Haugen’s GoFundMe page in aid of non-profit Whistleblower Aid which is raising funds to send Haugen to the UK and Europe to discuss Facebook with politicians there.

Alice wrote: ‘I am so very grateful that Frances has not needed to do her whistleblowing all alone. Whistleblower Aid is a non-profit that has helped several whistleblowers before this.

‘They are providing her with lawyers who are knowledgeable and experienced. They released this wonderful video of why she is doing this.’

Meanwhile, commenting on the senate hearing, her uncle Chris Haugen wrote: ‘They looked so impressed with her answers. I’ll bet she was the best witness they’ve ever had.’

In 2011, at age 27, she co-founded Hinge precursor Secret Agent Cupid, and took it to market. The dating app that focuses on long-term connections is today worth more than $2billion, according to BusinessofApps.

She founded Secret Agent Cupid with Justin McLeod in 2011. McLeod later said he helped found the app to cure his own broken heart after breaking up with the love of his life. 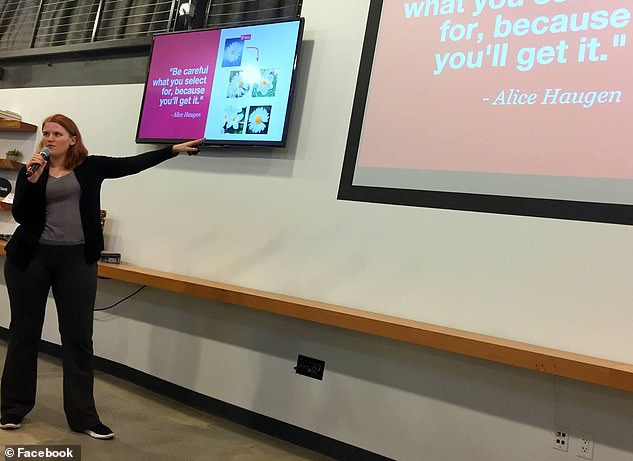 Hinge is now worth an estimated $2billion, though Haugen left it in 2011. It’s not clear how much money she earned by participating in the hugely-successful venture. Haugen is pictured in 2017

It’s not clear how much Haugen profited from participating in the venture’s first iteration as a desktop service.

It launched as a mobile app in 2013, years after Haugen parted ways with the company.

She founded Yelp’s photo quality team, and said she is the reason menu photos are available on the app.

Haugen, who left Facebook in May, explained why she had spoken out in a statement to Congress.

She said: ‘I felt compelled to take an active role in creating a better, less toxic Facebook.’

As the source behind damaging leaks about Facebook, she claimed it deliberately sought to stoke discontent, ‘chose profit over safety,’ and turned off ‘safeguards’ designed to stop the proliferation of misinformation following the 2020 election.