Famed DJ Diplo has responded to the fact that he could face charges after a woman claims he gave her chlamydia and recorded her while they had sex without her permission – then shared clips with his pals.

Meanwhile, the 42-year-old took to Instagram on Wednesday to address the allegations, claiming the woman in question was ‘an obsessed fan’ of his.

‘I will keep this story easy to read because I know the internet has a short attention span, and it was my goal to never address a stalker. I will refer to her as ‘SA’ (and you can find anything easily online) she was an obsessed fan of mine, and after I relinquished all contact with her, it appears that her only purpose in life has been to disrupt my work, my business, harass me and my close friends and attack me and threaten my family,’ his post began.

‘To be clear, SA was not a minor when I had conversations or sexual intercourse with her. Her own text messages admit this.’

The performer went on to call the encounter consensual while adding that the woman sent photos and videos to him for a few months after the tryst.

‘I had a night of consensual sex with her. Basically, SA reached out to me and I declined a few times but at one time decided to meet her. After that experience, we had exchanged texts for a few months, there was small talk, sexual flirting, she would send me pics and videos.’

‘Eventually it got too much to handle and, I stopped contact with her when I realized she had started to become obsessed with me, it began a nightmare of almost three years of her harassing and threatening me my family and my friends.’

Diplo went on to allege his accuser was ‘engaging in criminal activity’ before calling her a possible ‘call girl.’

‘SA would offer her friends and other people to have sexual experiences with, and that’s when I began to get suspicious that she was engaging in criminal activity, and was possibly a call girl. Here are some of the texts over the course of months ..’

The famed DJ added that she continued to ‘call and text me day and night on different numbers and whatsapp. She began to come to my house when I wasn’t there. one time I just hid in my neighbor’s house and ignored her. I don’t think she could physically harm me but I was afraid she was going to harm herself,’ his post read.

‘We always took the high road when dealing with her. We tried to deal with her in court and help her find help. Our detective had found out she had a previous restraining ordered against her in Florida (more on this later) after we rounded up many of her fake accounts.’

‘She denied having any fake accounts and said her friends were out to get her and pretending to be her…?? nothing was making sense and I really was getting worried she could be this delusional.’

His accuser, who has not been named by the LAPD or prosecutors, provided the details of the allegations which matched with those made by his ex, Auguste, who has previously gone on the record with her claims.

‘We are reviewing the referral and have no further comment at this time,’ said Rob Wilcox, a spokesperson for the LA city attorney, said of the allegations.

Diplo, whose real name is Thomas Wesley Pentz, was sued by Auguste for sexual battery, defamation and fraud in October 2020, and has repeatedly denied the allegations that August, 25, has made against him.

She has also accused him of raping her at a Las Vegas hotel room after one of his concerts, although that allegation does not form part of the criminal complaint against him.

California law considers knowingly passing on a sexually-transmitted infection and recording a sexually explicit video without a partner’s consent as misdemeanors. 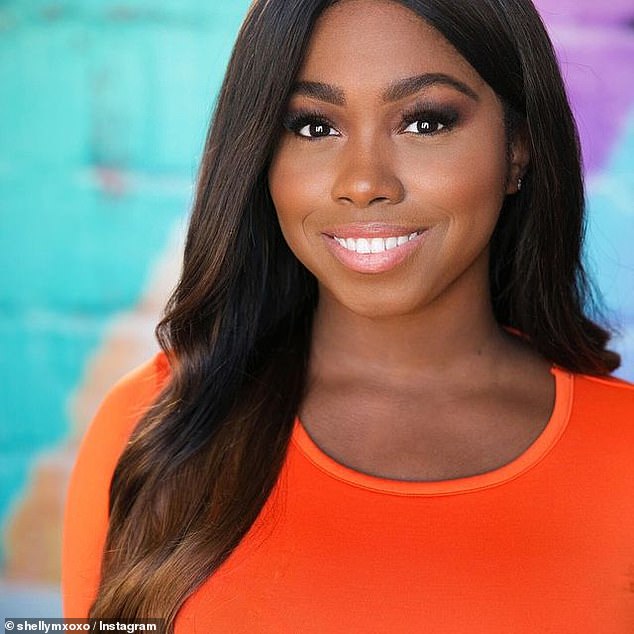 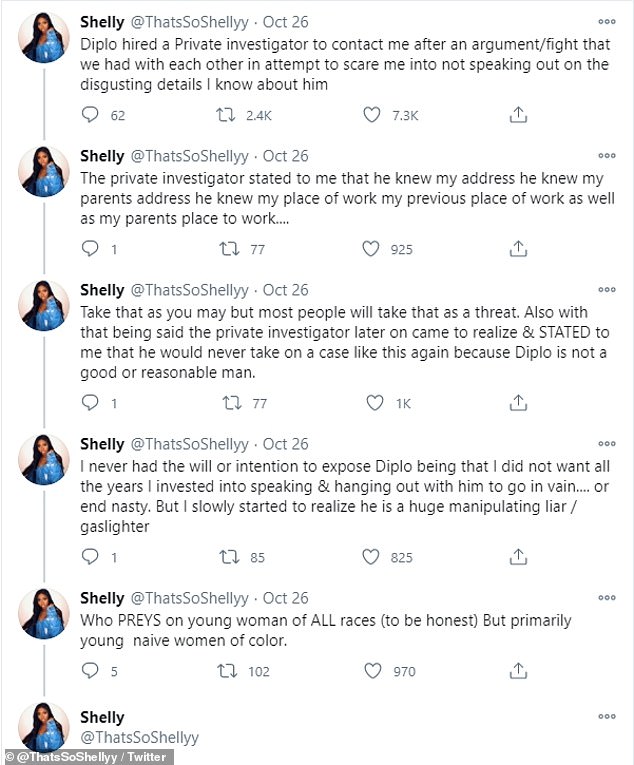 She shared her accusations against the celebrity DJ on Twitter and Instagram after Diplo fired a private investigator to scare her, she claims

That civil filing accuses Diplo of sexual battery, assault, defamation and fraud. Auguste said she came forward after Diplo hired a private investigator to contact her and ‘scare’ her out of sharing ‘disgusting details’ she knew about him.

In the suit, Auguste claims the performer first contacted her on Twitter when she was just 17 and ‘solicited nude photos of her.’

They went on to exchange ‘explicit’ images ‘before meeting in person for the first time in 2018, when she was 21.’ She claims that after she moved to Los Angeles ‘Diplo really began pressuring her for sex by sending unsolicited graphic photos of himself in sexual situations.’

The court documents also alleged that after Auguste confronted Diplo about the rumors he had herpes, he ‘cut off all communication’ with her.

But after they reconciled, a year later, in 2019, she claims ‘she gave in to the pressure and lost her virginity to Diplo.’

Not long after, she says she ‘was diagnosed with chlamydia’ and ‘believes she got it from Diplo because she says he was her only sexual partner at the time.’ 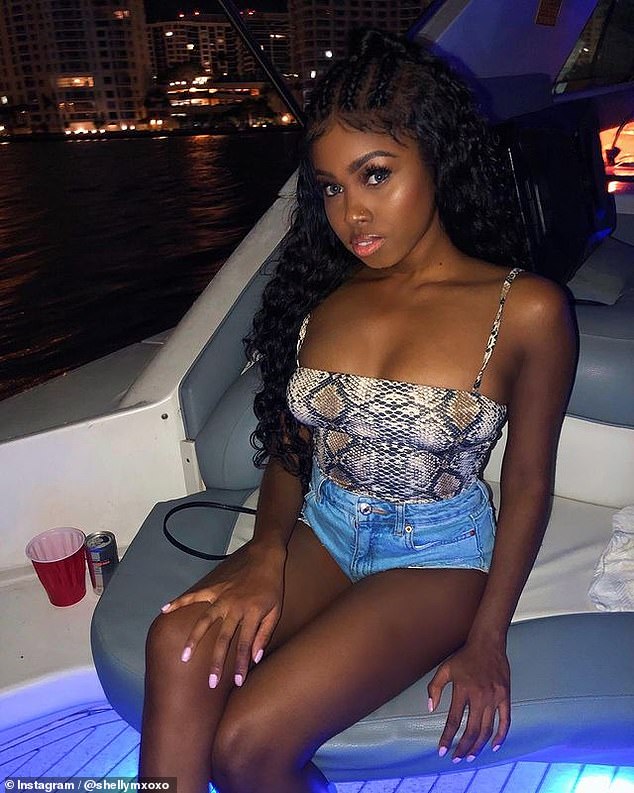 Diplo has admitted to having sexual relations with Auguste but claims that she has turned into a obsessive stalker, his claims mirror those that she made first in a filing for a temporary restraining order

In her original filing, Auguste adds: ‘I was caught off guard and shocked when Respondent sent me unsolicited videos of him engaging in sex with other females in or about October of 2018.

‘I sternly told Respondent that I did not want him to ever record us engaging in sexual activities.’

After claiming to have been contacted by a private investigator hired by the DJ the woman says she felt ‘threatened and intimidated’.

In her Twitter thread  detailing the allegations on October 26, Auguste alleged that Diplo took explicit footage of her without her consent, writing: ‘I SPECIFICALLY asked him not too & his reply was ‘f*** it. I’m recording this.”

She also claimed he hired a private investigator to contact her after they got in an argument – saying that he wanted to ‘scare’ her so she wouldn’t share the ‘disgusting details’ she knew about him.

In another tweet Auguste wrote: ‘I never had the will or intention to expose Diplo being that I did not want all the years I invested into speaking & hanging out with him to go in vain….or end nasty.

‘But I slowly started to realize he is a huge manipulating liar / gaslighter who PREYS young women of ALL races (to be honest) but primarily young naïve women of color.’ 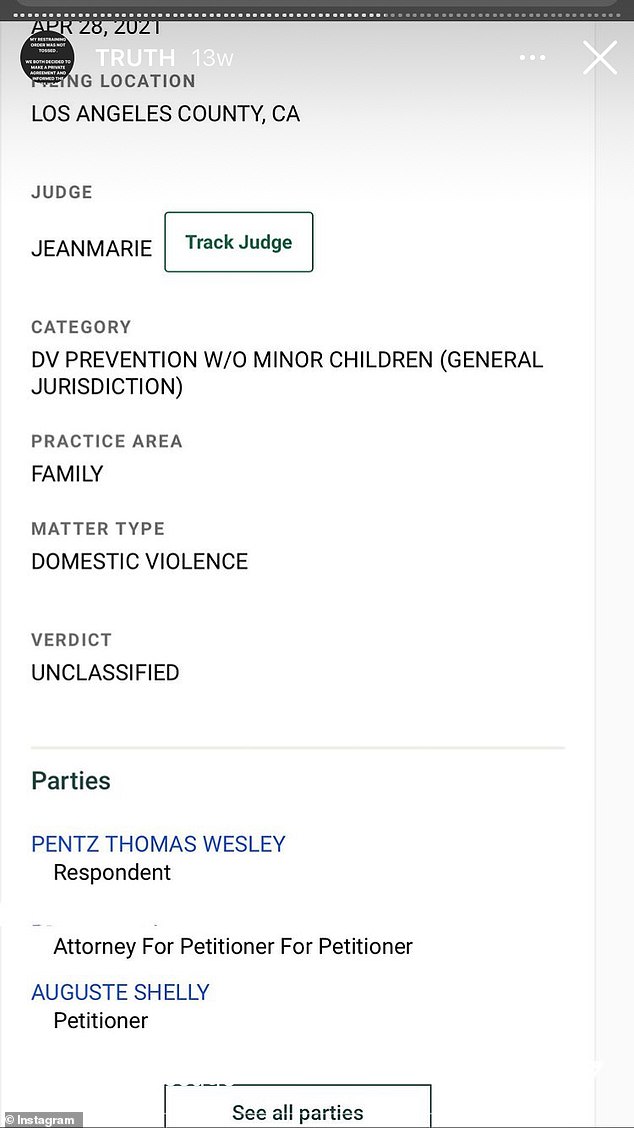 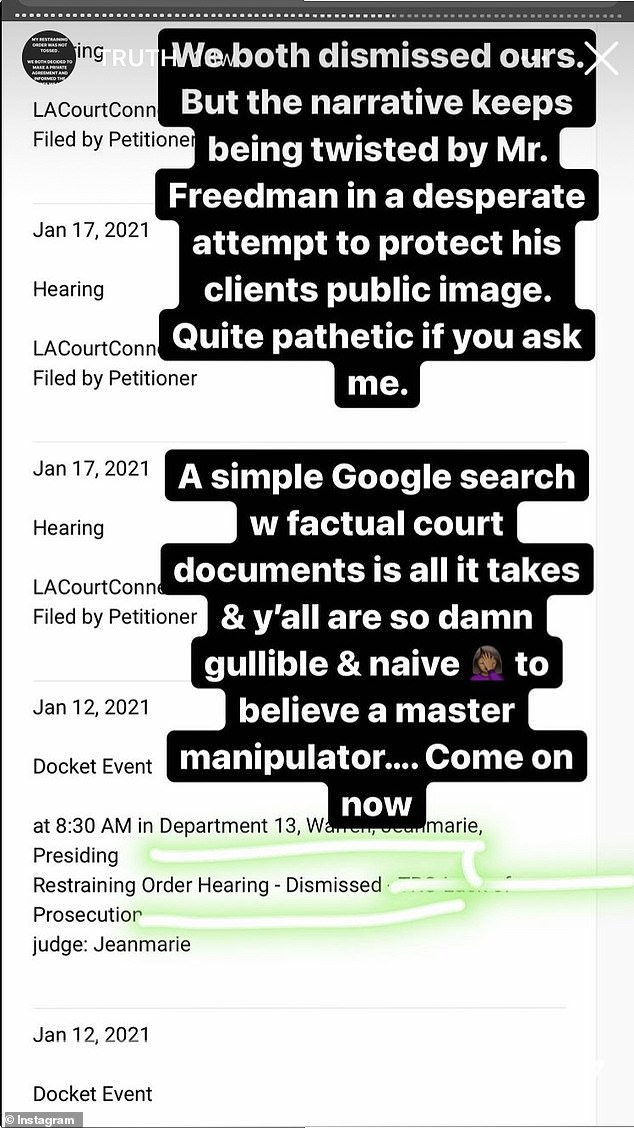 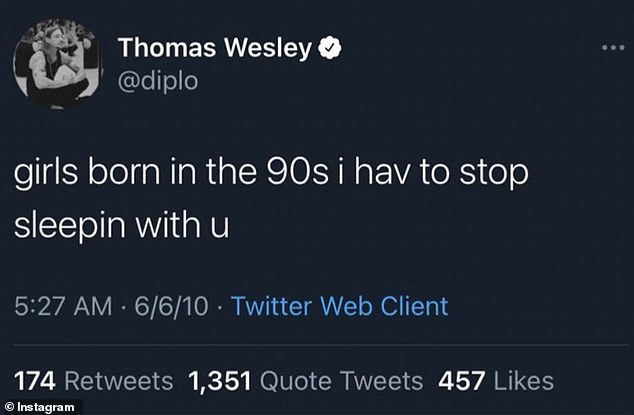 Diplo tweeted about sleeping with girls born in the 90s in 2010. At this time, those girls would be between the ages of 11-20 and he was in his early 30s 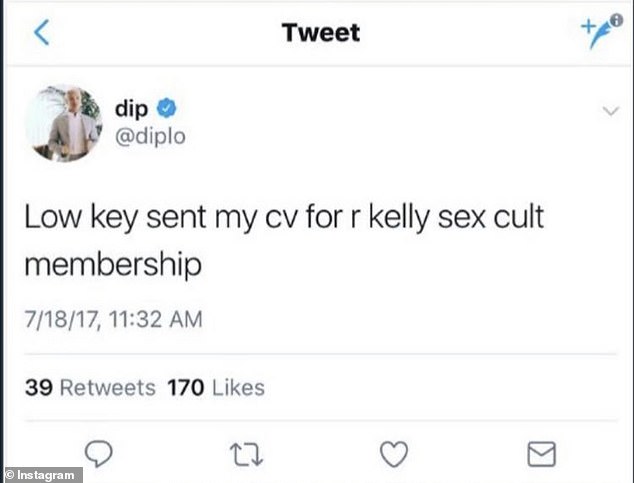 The DJ has a history of making inappropriate comments about young girls. Some critics online have dubbed him the ‘White R. Kelly’

Diplo’s attorney, Bryan Freedman said, ‘To be clear, in no way has my client violated any law. In fact, he has repeatedly made it clear that he wants nothing whatsoever to do with this person.’

Auguste first published the accusations on Twitter in October. Shortly afterwards, a nude image of her appeared on the site that was published by a user she believes was acting on behalf of the DJ in an attempt to ‘humiliate’ and silence her.

Through his attorney, Diplo denied the allegations to DailyMail.com at the time, before hitting back with his own filing.

He claims Auguste has been publishing nude images of him across social media, in addition to sending them some of his ex-lovers, including the mother of his children, Kathryn Lockhart. In December, Diplo requested a judge sign a temporary restraining order (TRO) against Auguste, citing incessant harassment of him and his family.

In his filing, Diplo claimed he and Shelly first met in 2018, when they immediately began exchanging nude photos and videos with each other, which he said he expected to remain private.

The artist also conceded in the filing that he and the woman had sex on a number of different occasions, insisting it was always consensual.

However, at some point in 2020, Diplo said his relations with Auguste soured, which is when he claims she began distributing explicit images of both him, and them both together, without his permission. 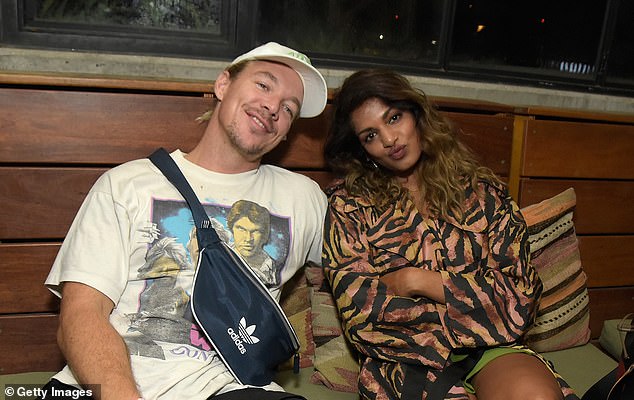 M.I.A. (right) rose to fame while she was dating Diplo (left), who she has accused of being emotionally abusive 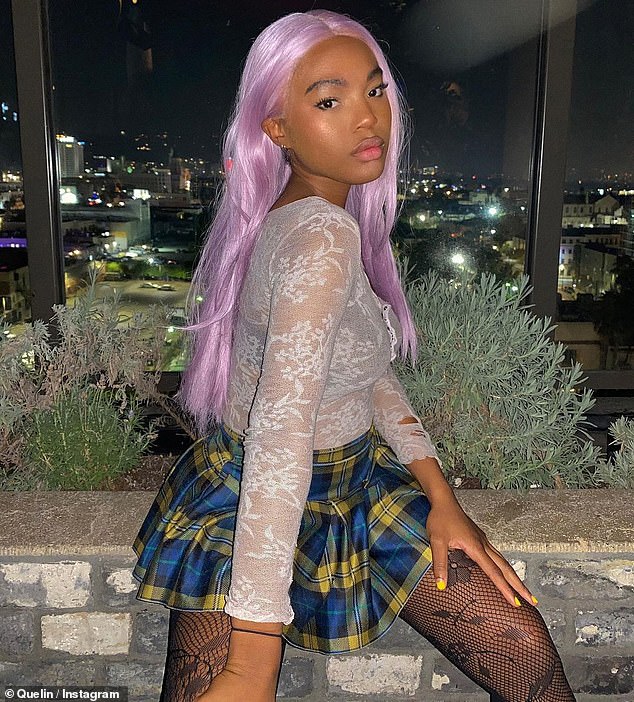 Quenlin Blackwell, 19, was questioned by fans when she revealed that she was living with Diplo but claimed that the relationship with platonic 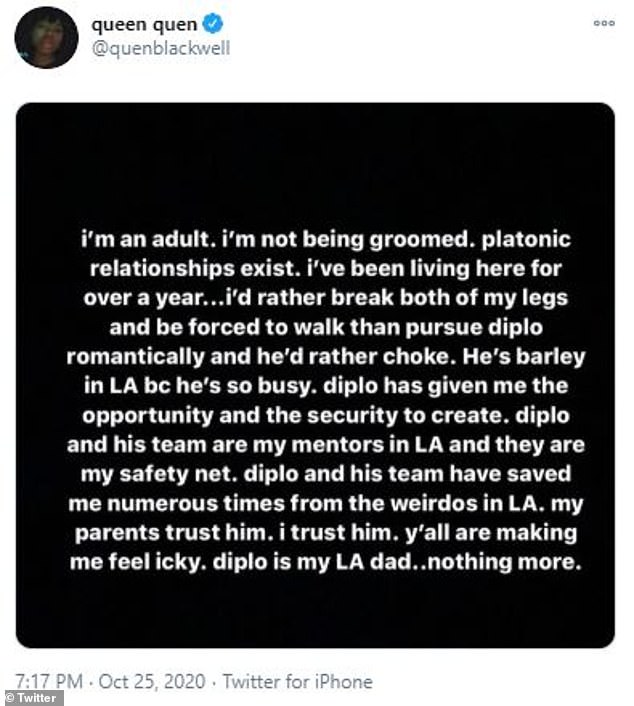 The allegations made by Diplo strongly resemble those made by Auguste in her filing.

Correcting other reports, Auguste shared a screengrab on Instagram showing that both restraining orders were disposed, claiming that both parties decided to make a private agreement and told the courts they did not want to proceed.

The Twitter thread filled with the allegations of misconduct by Diplo came as he was hit with backlash over his relationship with 19-year-old TikTok star Quenlin Blackwell.

Blackwell announced that she was living with the artist 23 years her senior in a video that went viral as critics remarked that he is way too old for her.

She defended herself by saying that Diplo was more of a father figure to her than a romantic pursuit – as he insisted that they are only friends.

That same month, rapper Azealia Banks made accusations of Diplo’s predatory behavior on the podcast Cheapy’s Two Cents. ‘I used to have sex with Diplo when I was 17. Diplo definitely found me on f**king Myspace,’ she said.

‘I always give him credit for f**king launching my career off, but yeah, I had to give him some teenage p***y to do it. He’s always been preying on young ethnic girls.’ Diplo would have been in his early 30s at the time.

Rapper M.I.A., who dated Diplo for five years, has accused him of emotional abuse.

The police investigation and its submission to prosecutors who are considering criminal charges reveals a new level of scrutiny for the allegations made against the celebrity DJ.

For his part, Diplo’s Instagram response chalked the allegations up to being a celebrity, and that such ‘unsubstantiated claims’ come with the territory.

‘Culture is quick to follow unsubstantiated claims. I’m a public figure and this comes with the territory and I understand that. I want to add also these previous claims have been dropped or abandoned and those facts go unreported. This is so frustrating and embarrassing. I am not this person and I won’t be extorted by anyone no matter how stinging the press can be.’

‘Even over the past 2 years I’ve never been bothered by these rumors if anything it has made me stronger and smarter, all of my friends and partners have never questioned me and that was what has been important to me. The people in my life know me for who I really am. I will continue to do everything I can to end this in the most respectful way but I will not give in to lies and harassment.’