Moderate Democrat Joe Manchin spelled out his opposition to President Biden’s massive spending plans on Thursday, warning his colleagues against fostering an ‘entitlement mentality’ and saying he could only support a $1.5 trillion package – $2 trillion less than the White House wants.

The West Virginia senator is one of the key votes standing in the way of Biden’s entire domestic policy agenda.

The impasse between moderate Democrats and progressives also threatens to derail a $1 trillion bipartisan infrastructure bill as the White House said it continued to work to bring moderate hold-outs into line.

Biden was forced to cancel travel plans this week in order to continue talks.

Manchin told reporters on Capitol Hill that he could only back a spending bill that cost $1.5 trillion and demanded that key welfare provisions be means tested.

‘I cannot accept our economy or basically our society moving towards an entitlement mentality … that you’re entitled,’ he said.

Instead, he added that he was in favor of helping people who also made an effort to help themselves.

He has been circulating his $1.5 trillion plan since July, setting out what he said was a way to limit the impact on inflation. His measures include means testing on new programs, including health care, child care and education.

Sen. Joe Manchin told reporters that his red line was $1.5 trillion for a massive spending bill – some $2 trillion less than President Biden’s ‘build back better’ plan – and warned Democrats against fostering an ‘entitlement mentality’ 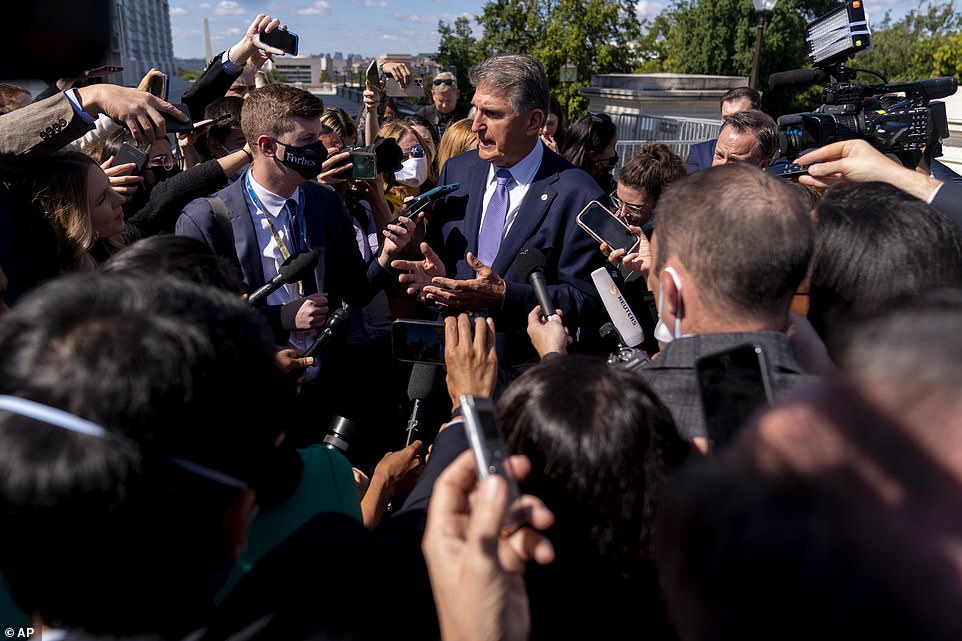 Manchin attracted throngs of reporters outside the U.S. Capitol as he set out his concerns about Biden’s $3.5 trillion plan 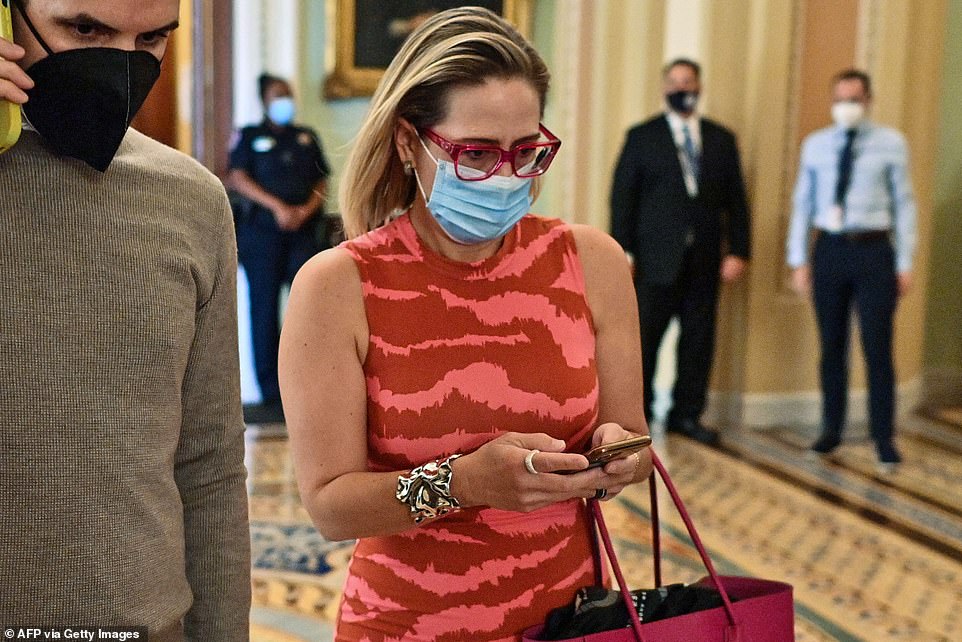 Democratic leaders are struggling to get centrists including Senator Kyrsten Sinema behind President Biden’s $2.5 trillion spending plan. Along with Manchin, her opposition threatens to derail Biden’s entire domestic policy agenda although she has not set out public red line 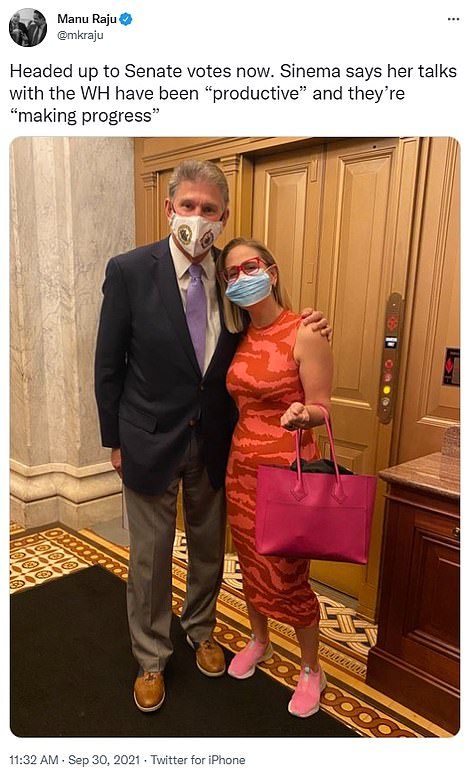 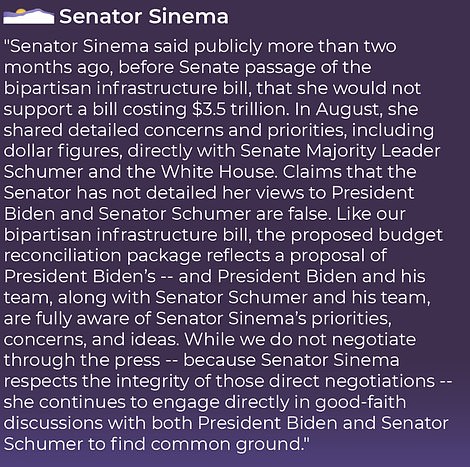 Sen. Sinema’s office hit back at criticism that she has not publicly set out her negotiating red lines

His comments underscore the gap between moderates – including Arizona Senator Kyrsten Sinema – and progressives who initially wanted as much as $6 trillion.

The bill is being steered through Congress using budget reconciliation rules that prevent Republicans blocking it. At the same time, it means just one Democrat can deny Biden the simple majority needed for its passage through the Senate.

Sinema and Manchin have been under pressure to go public in setting out their red lines.

In a statement on Thursday afternoon, Sinema’s office restated her opposition but said she would not be negotiating in public.

‘While we do not negotiate through the press – because Senator Sinema respects the integrity of those direct negotiations – she continues to engage directly in good faith discussions with both President Biden and Senator Schumer to find common ground,’ she said.

In a sign of the depth of crisis, Biden was forced to cancel a trip to Chicago on Wednesday in order to continue talks.

White House Press Secretary Jen Psaki said Biden had been talking to the two senators to try to keep his domestic agenda on track.

And she said Biden was open to means testing of benefits.

‘It’s an ongoing discussion but again our objective is to is to target and focus on bringing relief to the middle class,’ she said.

‘That’s what the president wants to see this agenda accomplish.’

But Manchin’s public comments show just how far apart the two sides are.

Talking to reporters outside the Capitol building, he said he signed a memorandum of understanding with Senate Majority Leader Chuck Schumer in July setting $1.5 trillion as his limit.

‘I didn’t think any of this was needed at this time. I thought the infrastructure bill was really what was needed but I said fine, this is a condition I would get to and that was a $1.5 [trillion package],’ he said, as protesters could be heard chanting ‘Manchin in a traitor.’

The result is a pivotal week in Biden’s presidency.

House Speaker Nancy Pelosi huddled with her leadership team in the morning and said she was determined to push on with the infrastructure bill, even as her top deputy expressed doubt liberal members of the party would give it the support it needs.

‘This is the fun part,’ the speaker said. ‘We’re on a path to win the vote. I don’t want to consider any options other than that. That’s just the way it is.’

Asked by reporters on Capitol Hill if the bipartisan infrastructure measure – known as BIF – would pass, he replied: ‘Nope.’

Pelosi, however, was in a jovial mood despite Biden’s agenda hanging by a thread.

She said a deal would come together even as both wings of her party held firm.

‘Let me tell you about negotiating. At the end is when you really have to weigh in. You cannot tire. You cannot concede,’ she said.

Democrats will race through a series of votes on Capitol Hill Thursday. It began with good news for the White House as the Senate took a step towards averting a partial shutdown of the federal government.

In a bipartisan 65-35 votes, the Senate agreed to fund federal agencies through Dec. 3. The House of Representatives was expected to pass the measure later in the day, sending it to Biden to sign before funding runs out at midnight.

‘Today, the Senate will consider and pass a government funding bill and do our part to avoid a shutdown,’ McConnell said on the Senate floor.

While that crisis appears to be averted, the other one is still playing out. 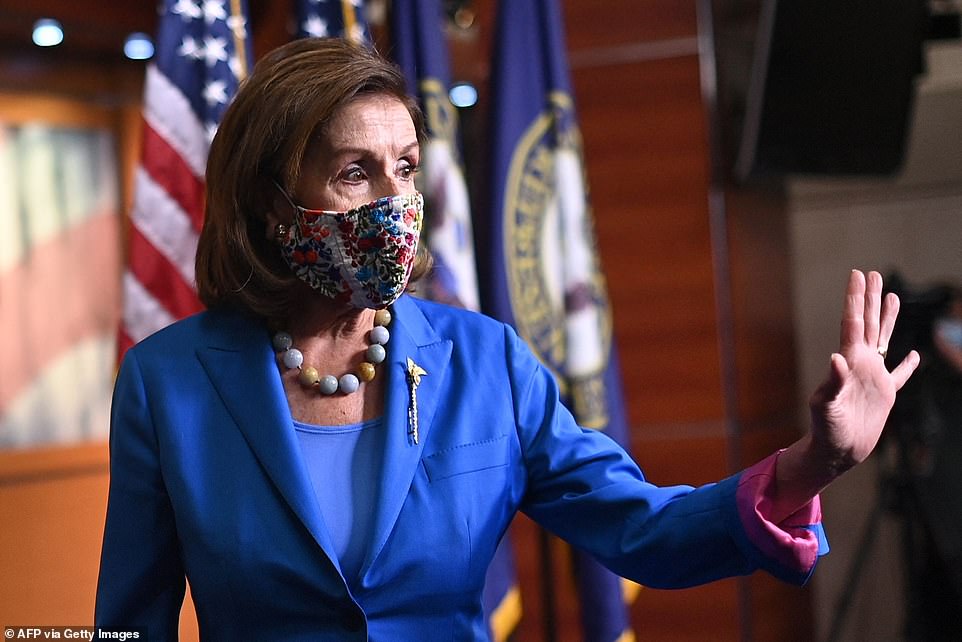 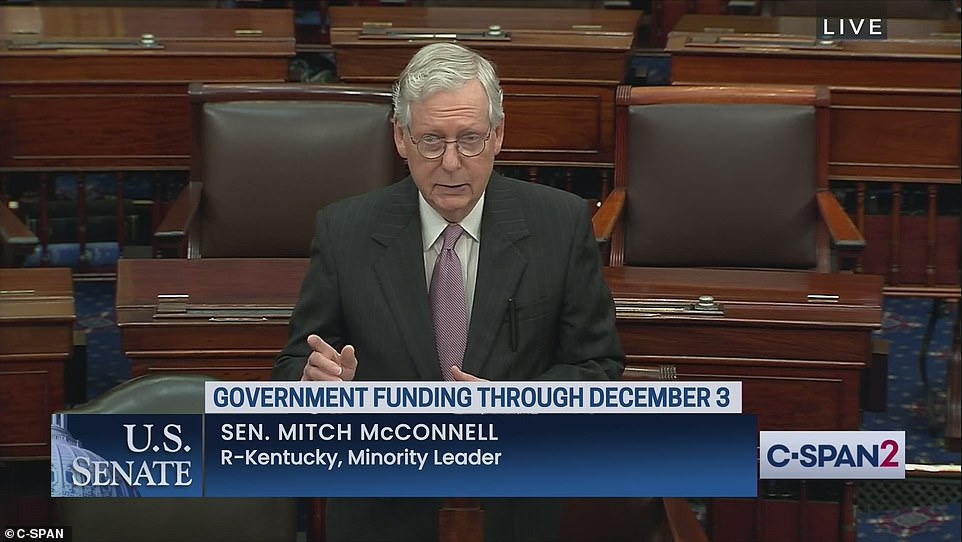 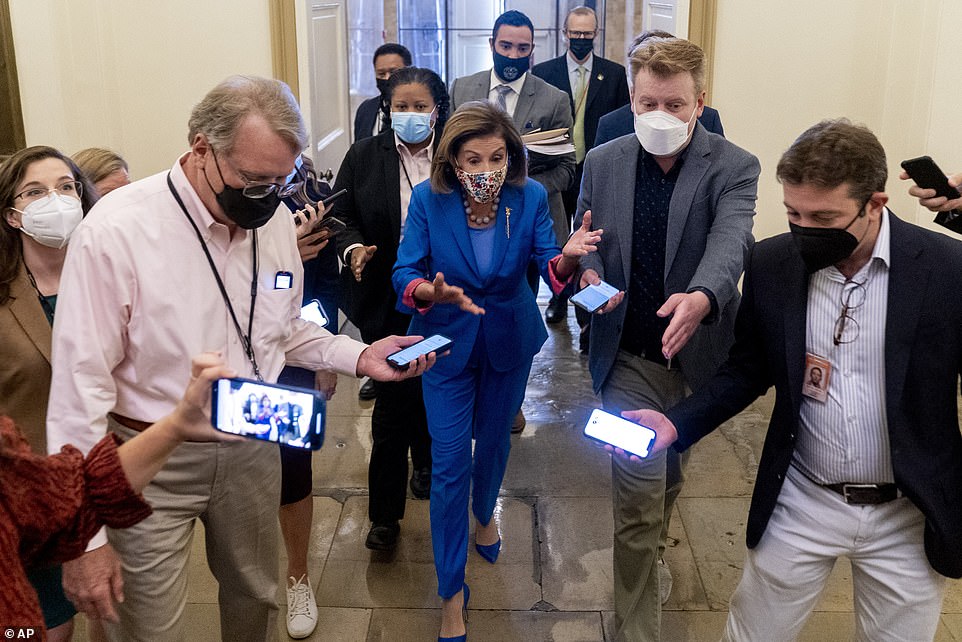 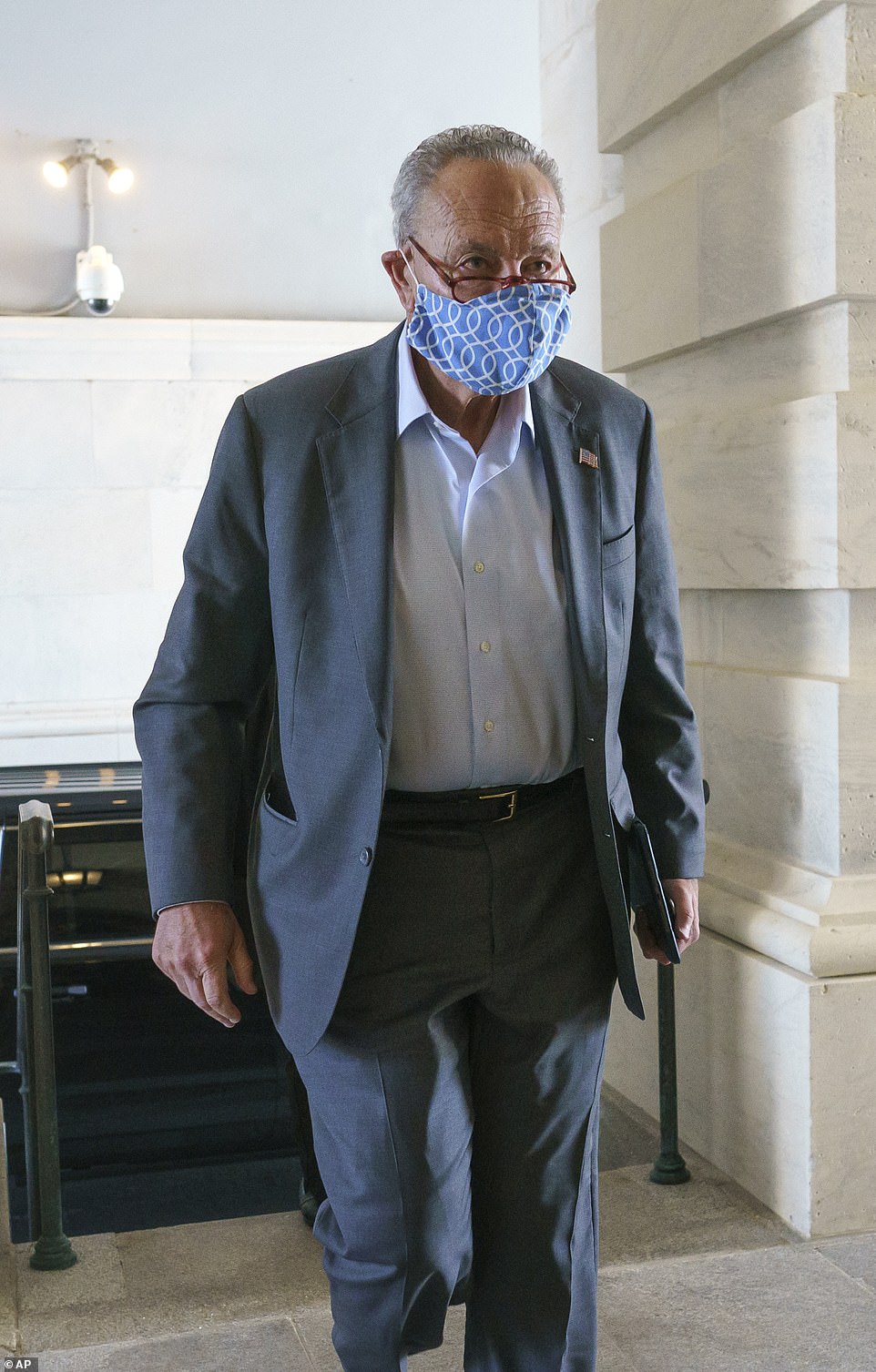 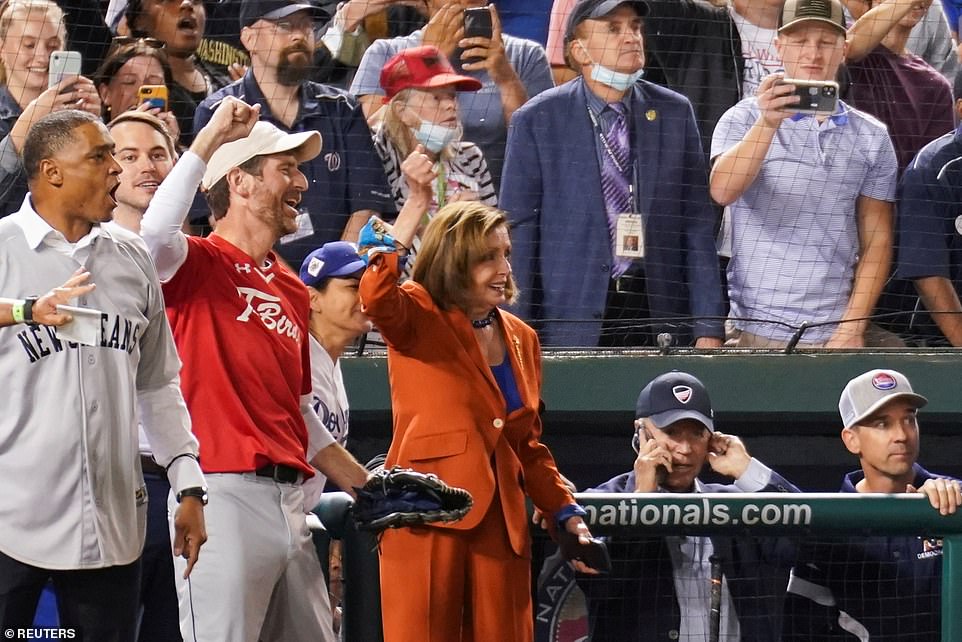 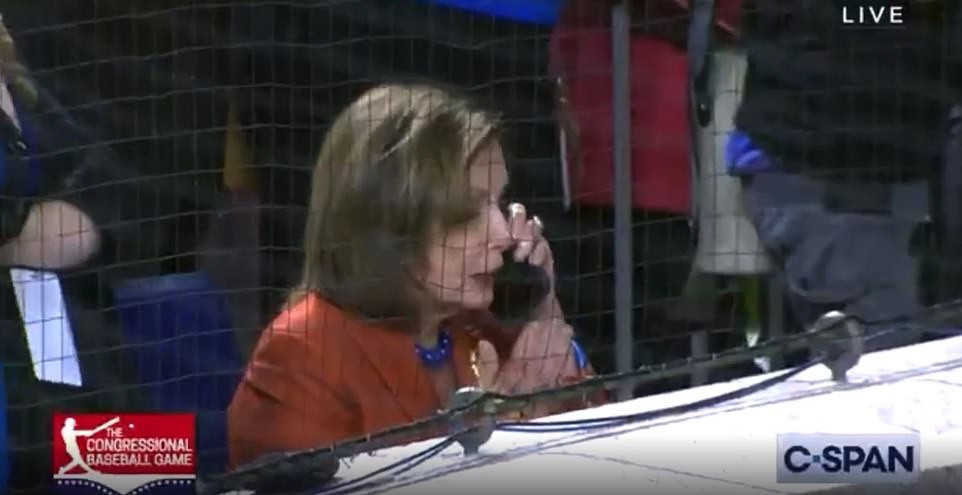 DEMOCRATS’ LAST-MINUTE DEAL TO AVOID A SHUTDOWN: THE TERMS

Keeps the government operating at current levels until December 3.
Provides $28.6 billion to disaster reliefs after Hurricane Ida devastated Louisiana and the North East.
Provides $6.3 billion to Afghan refugees arriving in the U.S. after fleeing Kabul as the Taliban took power.
Senate Minority Leader Mitch McConnell said Democrats will be able to extend government funding because they are following a GOP roadmap.
He criticized the lack of funding of Israel’s Iron Dome missile defense system and said it’s ‘baffling’ that Israel has ‘become a thorny subject for the political left’.
Senate Majority Leader Chuck Schumer announced the deal on Wednesday night and said ‘we are ready to  move forward’.

With a margin of four seats, Pelosi can’t afford to lose the liberal wing of her party.

Negotiations went on through the day and into Wednesday night’s Congressional Baseball Game. Biden made a surprise appearances – and was greeted by boos from Republicans – as he brought ice cream bars to the lawmakers.

Pelosi also sat with House Majority Whip Steny Hoyer during the part of the game, the two of them having an intense discussion as the plays unfolded before them. In the charity game, which features Democratic versus GOP lawmakers, the Republicans won.

Pelosi and Senate Democratic Leader Chuck Schumer also met with Biden at the White House on Wendseday before the game, as the Democrats rush to salvage the president’s ambitious domestic agenda.. And White House aides spent much of the day on Capitol Hill trying to cut a deal.

Biden’s budget package would raise taxes on corporations and the wealthy and use the money to expand government health care, education and other programs in a massive overhaul of social programs.

In the 50-50 Senate, Biden needs every Democratic vote.

Biden spent hours meeting with Sinema at the White House on Wednesday, but appeared no closer to a deal after Manchin fired off a scathing statement decrying the broad spending bill as ‘fiscal insanity’ and warning it would not get his vote without adjustments.

‘I cannot – and will not – support trillions in spending or an all-or-nothing approach,’ said the West Virginia Democrat.

Manchin said he ‘can’t support $3.5 trillion in spending when we have already spent $5.4 trillion since last March.’

‘At some point, all of us, regardless of party must ask the simple question – how much is enough?’ added Manchin.

‘What I have made clear to the President and Democratic leaders is that spending trillions more on new and expanded government programs, when we can’t even pay for the essential social programs, like Social Security and Medicare, is the definition of fiscal insanity.’

Pelosi may be forced to postpone Thursday’s vote on the $1 trillion public infrastructure bill that Manchin, Sinema and other centrists want, but that progressives are threatening to defeat unless the moderates support Biden’s broader package.

White House press secretary Jen Psaki assured reporters that Sinema, at least, wanted a reconciliation bill to get passed. ‘Our sense is she does,’ Psaki said.

Even before Manchin’s statement came out, progressive Sen. Bernie Sanders was encouraging progressives in the House to kill the bipartisan infrastructure bill – using that as leverage to get the $3.5 trillion reconciliation bill done.

‘His statement has just probably created at least a bunch more votes on the House floor against a bipartisan bill,’ she said. ‘I feel very confident that we have the votes [to block it] if the bill does come up.’

Jayapal of Washington state said of Manchin: ‘He needs to either give us an offer or this whole thing is not going to happen.’

The bipartisan infrastructure bill has already passed the Senate. 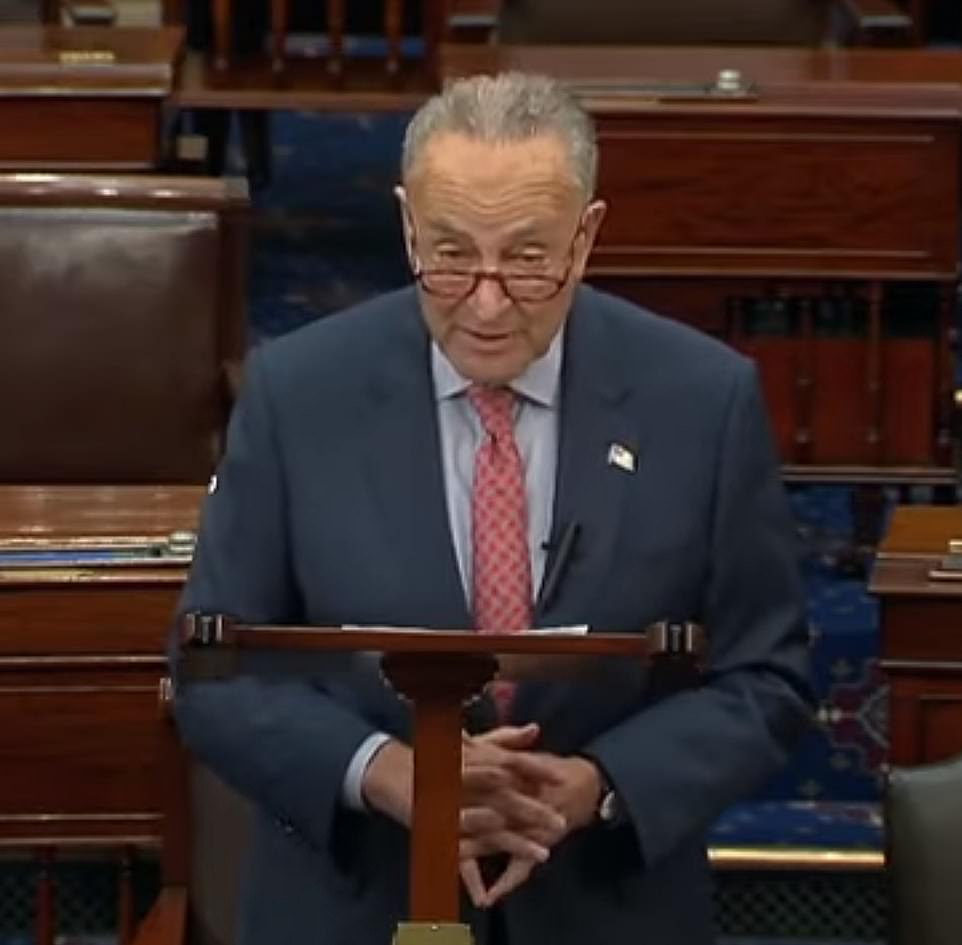 Senate Majority Leader Chuck Schumer says that Republicans and Democrats have reached a deal to extend government funding, which is set to expire at midnight on Thursday

Meanwhile, Schumer announced Wednesday night Republicans and Democrats have reached a deal to extend government funding, which is set to expire at midnight on Thursday.

‘We have agreement on the CR – the continuing resolution – to prevent the government shutdown. And we should be voting on that tomorrow morning,’  Schumer said.

The deal, which funds the government through December 3, includes $28.6 billion for natural disaster recovery and $6.3 billion for Afghan refugees.

Democrats agreed to strip out language which would have suspended the debt ceiling through 2022, appeasing Republicans who insist that Democrats should raise the borrowing limit themselves by using the process called budget reconciliation.

The Senate will vote on the funding resolution on Thursday and it should be to the House sometime in the afternoon. Once it passes both chambers it goes to Biden for his signature.

That still leaves the question of raising the debt ceiling to prevent the U.S. government from going into a disastrous credit default by mid-October, an issue Republicans insist that Democrats must resolve on their own in reconciliation.